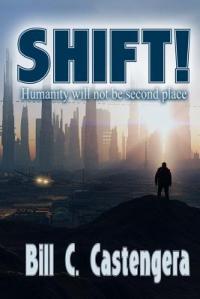 When I first picked up Shift! By Bill Castengera, I thought it was a very different book and that I didn’t quite like it, and yet, I couldn’t seem to put it down. It is different. I didn’t put it down. If you pick up this book, I would suggest not putting it down either, because it’s worth finishing. This book is like a clever science fiction novel masquerading as literary fiction, or is it the opposite?

After finishing Shift! I’m still not sure I know what to think.

Castengera is either a genius who doesn’t play by the rules of the genre or I didn’t understand what the genre was before I started reading. Castengera had me at the premise and the book held me because it was well written and was very good at hinting at an intrigue I just had to know about.

The story starts off a bit haphazardly, jumping from person to person while staying in an impeccably detailed and close view of the conflict so that it is invisible until the circle slowly widens and at the same time closes in on itself so that the imminent conflict is obviously apparent. As a reader, you know more about what’s going on in the minute sense until given the overall context and so feel completely removed from the story, like you are watching from afar. By the time the story and external conflict reveals itself, you won’t be able to put the book down. Castengera has revealed the story and the overall structure very differently than your average book.

Castengera has an odd way of using language that is not so confusing as a Clockwork Orange, but not as clear as any pop YA out there. It’s intriguing. The narration is not full of direct thoughts or feelings but facts that could be thoughts. Sometimes the narration strays to what seems off topic, but usually in humorous narrative asides. Castengera reminds me of Douglas Adams in his overly-wordy writing style, where every extra word is cherished. Here is one example of the odd wandering type of narration:

“The nurses, and I say ‘nurses’ not meaning just women or even just men, but both genders, for I am aware of the fact that people consider nurses as women so I felt I must make the point clear.” (Page 64).

This novel was published through CreateSpace Independent Publishing Platform August 18th, 2014 and is available on Amazon here.