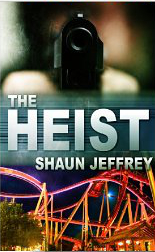 The Heist by Shaun Jeffrey

The Heist opens with a high stakes robbery at a theme park, resulting in the deaths of 87 innocents when the gang leader blows up a roller coaster as the robbers escape. Months later the lead investigator in the robbery/murder case Kurt Vaughn is out for a nice family day in the park with son and wife when they are all unwillingly thrust into the gang leader’s newest plan.

I picked up this novel because it involved geocaching and I wasn’t disappointed. There was a multi-cache with some cool puzzles and interesting hiding places. The author used some of the more clever points of geocaching, although technically only one geocache was involved. This story was like the geocache version of Dan Brown’s clever clues in The Da Vinci Code.

For such a simple story, at approximately 24k words, it was quite intriguing and the author kept the tension throughout, climaxing in an exciting hold-your-breath way and ending just the way I wanted. There were a few plot holes and inconsistencies, but they didn’t detract from the thrilling plotline. This could have been a longer story had the author filled in details between the heist and the time we meet Kurt and his family, but I thought the novel worked quite well just as it was.

This novel was published by Deshca Press 02/05/2013 and is available on Amazon here.