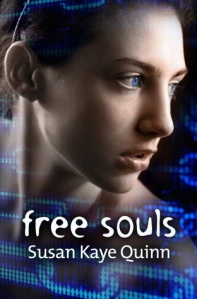 “Jackertown Code: no kill jacks, no stealing, no mental or physical assaults, no forced jackwork, no contracting to mindreaders, no unauthorized memory wipes, and no vigilante justice.” (Kindle Locations 7966-7970).

Kira didn’t want to be part of a clan or conspiracy. She just wanted to live her life, but mindjacker obsessed agent Kestrel and the human rights’ violations of the government have made that impossible. Kira also wants to keep her family safe and so joins the Jacker Freedom Alliance under the leadership of Julian, a powerful and different kind of mindjacker entirely. In Jackertown central they are gearing up for war, but when war comes to their door, will they be ready?

There was more going on than anyone knew. Quinn closes all loose ties in this third and final book in the Minjack Saga Books. There were a few things I didn’t realize were going on that were explained in this book and everything was wrapped up nice and neat. The twist at the end creates the possibility of an entirely new trilogy based on this world.

It felt like Kira and her mindjacker rebels were always one step behind Kestral/the government and were never able to outsmart or outjack or out-action anyone. I would have liked to see them triumph in some way, instead of continually being on the defensive and being pushed back and back. Was there no way around the mind shields? I really wanted Kira and her super strong jacker buddies to figure this problem out, but they never had the time.

Overall I enjoyed the wrapup this final book presented and the concept and story in the series overall.

This novel was published through Createspace Independent Publishing Platform on December 22nd, 2013 and is available on Amazon here.