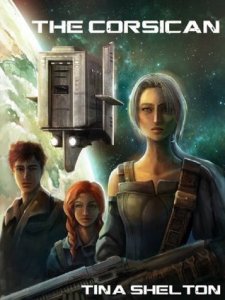 The Corsican by Tina Shelton

“You’re not on Kalix any more, and those people have no further hold on you, except what you allow them.” (Page. 50).
It will take much more than simply grabbing and running to free these slaves from captivity. Their parents paid for their passage and the older kids will finally be able to hope for a future, but from the beginning of the rescue, things didn’t go as planned. Complications will arise from without and within the Corsican is it plods along to the planet Caserne, where slavery is illegal. The Corsican and her crew will have less than eighteen months to ready the kids for a new life and to battle their way to freedom from those who would keep them from it.

The Corsican is an enclosed world with lots of older kids who must learn to live together and learn together. There is a larger world out there that is trying to shut them down. This setup reminds me a lot of Ender’s Game, but Tina Shelton’s world has much more going on and the relationships she builds are more interesting and more varied than Card’s.

Shelton builds a story of change and forgiveness. Of friendships and loyalty. Of action and adventure. Of learning and growing. Of figuring out who they are and what they stand by. Of letting go of the past and embracing a free future full of possibilities. Of finding out what they’re good at. Of forming allegiances and seeking out revenge. Of petty complaints and drama. There is almost no end to what is going on in this story.

Everyone has their own story. In the large cast of characters, everyone has a backstory. Every character is fleshed out and different. Blaise is the noble who has a foot in both worlds and wants to be accepted for who he is but has a hard time of letting go of the prejudices he learned in his past. There is so much to learn within the story of Blaise and how he grows and develops. Violet is a mod with strength and speed, taught to be meek and doubtful of doing anything with her strengths. She could kick anyone’s butt but has learned to not stand up for herself. Rix has a unique ability with machines and putting her neck out for others. Tristan and Payet both have secret abilities that set them apart from the others. Then there’s Jestyn and Jack and the Corsican’s pilot and the mysterious Syrah. Tina Shelton gives us so many wonderful characters to root for.

This is a science fiction novel for anyone. It has fighting and revenge. Drama and peace negotiating among teenagers. You might even learn something about yourself, or at least how to handle stubborn, obnoxious, and at times pretentious kids.

This novel was published by Amazon Digital Services April 2nd, 2014 and is available on Amazon here.