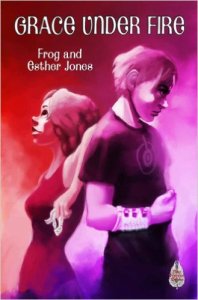 Summoning isn’t legal, but it’s done all the time under the nose of the public and the police. Summoners work to maintain balance in the world and make sure nothing nasty gets through the Weave that separates worlds. Grace Moore is an average Summoner sent to investigate the mass murder of a group of summoners in Spokane. Why Grace? Because she’s good enough and everyone else is busy. And did I mention it was dangerous? While in Spokane, Grace encounters the source of the murders, a rather large nasty beast that almost kills her and wants to eat Summoners and soak up their power. At the last minute, the beast is distracted by an unusual power burst and takes off, straight toward a crowded mall. Meanwhile, Robert Lorents is enacting petty revenge using Summoning and Grace has to save his butt. As a Summoner with loads of potential, perhaps Robert is the key to saving Spokane from the big nasty.

I thoroughly enjoyed the juxtaposition of a high school boy and a mid-thirties hippy chick. Both main characters, Robert and Grace, were well defined and full of their own personalities. It was super neat to see how each character viewed themselves and each other through the POV changes between chapters.

The world and rules for Summoning (magic) were very well defined. There were plenty of explanations for how the Groves functioned and what the Weave was and the ins and outs of Summoning. Summoning was unique enough for magic to be intriguing every time it was defined and every time I saw it in action.

The climax was phenomenal and perfectly timed.

My only critique is that many of Grace’s one-liners fell short and I did not find her as humorous as she was supposed to be written.

This novel was published by Sky Warrior Book Publishing, LLC. on October 11th, 2012 and is available on Amazon here.