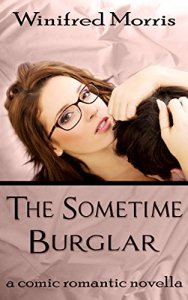 Emma’s a research psychologist who burgles to pay back her student debt, but sometimes she mails back the sentimental items. She’s sometimes an ethical burglar. She never bungles a burglary, but she has a hard time dating because she’s the nerdy, smart woman. The one time she keeps evidence from a job, she gets caught up in something far worse than petty theft, but at least she’ll get to talk with a handsome lawyer!

With wit and humor, Winnifred Morris has written another entertaining story. Her main character is an oxymoron: an ethical burglar. Emma is so much more than these two characteristics. She’s a bit dissociative from everyday emotions, making her a fascinating character. Emma wants to understand humanity in order to fix social problems. As a reader I want to understand Emma.

When her gay friend Merlin leaves Emma alone with a new problem to solve, she’ll thrust herself headlong into the challenge because it doesn’t occur to her that she could get in over her head. Cue sexy lawyer and Emma will get so far involved that she won’t be able to back out. I loved how it never even occurred to her that she needed help. She involved the lawyer because she could, not because she needed to.

Though this story is under 40k words, it still felt like a full novel with fleshed out characters and plot, intrigue and complexity.

I received an ARC of this story.

This novel was published by Eastside Gal Publishing on December 27th, 2016 and is available on Amazon here.