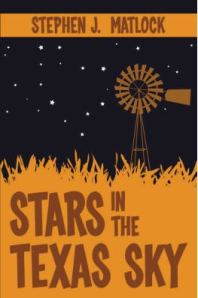 Stars in the Texas Sky by Stephen Matlock

Windmill is a tranquil orderly town in the middle of Texas where change is slow in coming in the year 1952. Tabitha tells the mayor about Windmill on page 34, “It’s small-minded. Nothing Ever happens here. It’s just a wide spot with two roads running into each other. No one comes here – they all come from  here.”

Benjamin Clark has been on the short end of the stick his whole life, ever since he understood that his skin color made him different to others’ eyes. Henry Valentine  is the Junior Safety Patrol Officer who is growing up on the right side of town. Both boys are passionate about baseball, have a growing interest in girls, and question the system of race.

Stephen Matlock has confronted a sticky issue in this book. He confronts the topic through the eyes and eventual friendship of two boys born so different because of skin-color and so similar because of their love and passion for baseball and doing what is right. Matlock confronts this issue in the light of growing up and becoming a man. It is a coming of age novel. The boys are just around 13 years old and the reader gets to feel their confusion and frustration in the backwards-thinking town that they currently live in. Matlock masterfully tells a coming-of-age story relevant for any reader, for he tells the story of understanding, honesty, thinking for yourself, standing up for what is right and what you believe in, and more. The story goes deeper than just a boy and an unlikely friend and deeper even than racial tension in a small Texas town. There is fighting, murder, revenge – all the makings of an intriguing read.

Matlock has many life lessons packed into this book. There are so many coming of age themes that I thought the one about the boys’ confusion about girls and their growing feelings towards girls was unnecessary for the story.

Matlock also had a tendency to repeat his life lessons. I love the quotable bits but it does get a little hit-you-on-the head until you get it as you read along. Throughout the novel Matlock writes some profound tidbits, like “Dreams lead to sorrow same as night leads to day.” (Page 5). Matlock certainly has a way with his words and his dialogue is ten out of ten.

It’s only natural that a book’s language should match the time period and setting. Stephen J. Matlock does just that – naturally weaving in descriptions that match the time and the place – which is difficult to do unless you are a master of your craft. The only part that caught me by surprise was the climax in the middle of the book, setting me adrift in a sea of unexpected plot turns, but Matlock firmly led me ashore when the subplot he had been building broke through the surface, tying all the elements together in the end. Still, if only he didn’t end the main story (in my mind) half way through the book I would have been way more satisfied.

What is growing up?

“‘Son, you gotta learn how it is in this town and this country. You keep your head down, don’t look a white man in the eyes, don’t be looking at a white woman, and just never ever think of touching a white woman less’n ou want to lose an arm. Never.'” (page 32).

“Growing up means you learn to accept things the way they are.” (Page 61).

I recommend this book for anyone who enjoys a historical fiction book set in America (the South) or a coming-of-age novel.

This novel was published through Createspace Independent Publishing Platform 07/01/2012 and is available on Amazon here.

One thought on “Book Review: Stars in the Texas Sky by Stephen Matlock”