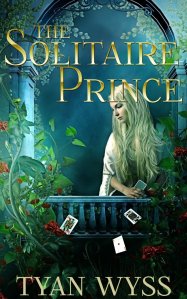 The Solitaire Prince by Tyan Wyss

King Henry cannot see further than the length of his own nose. “All his life he’d been the one in control, barking out flippant orders and fickle whims to his subordinates. It would be a nightmare indeed to lose his power and control to another man; to a mere woman, inconceivable and humiliating.” (Page 46).

What the king fails to realize is how clever his own daughter is because he never wanted a princess, he wanted a son. She must grow up in the shadow of his rules. No chess! She might beat him. No climbing trees! It’s not ladylike. Only solitaire is allowed, and with that game she might be able to bend the rules to get what she wants, but according to the king, one can’t cheat at solitaire.

Tyan Wyss shows us that she is very skilled at her back story without being boring or overly descriptive. The back story is told in the perfect rhythm and with the perfect progression of time to arrive at the heart of the struggle.

Wyss gives us an entire world within King Henry’s castle and is able to place the reader into the Princesses’ predicaments (yes there is another Princess). I loved the specific food descriptions, they really put me into the world of King Henry and Princess Christine.

It is a special story indeed that can deliver a full and complete novel without a true evil villain or one that is able to redeem himself by the end. With so many villains, once evil always evil pervades, but Wyss is able to construct a character that is conflicted enough, through a story that is different enough, that the ‘villain’ is able to transform.

This story is a true young adult novel for all ages, as it’s written in a clever style. Wyss delivers a clever twist on the last line, summing up the slight bending of a Princess fairy tale in this delightful novel. “Their voices faded softly away as everyone tried their best to live happily ever after.” (Page 158). The voice of the writing style is more than just warm and intimate to the story, but is also a great translator of the truth of the characters’ struggles.

This novel was published by Tyan Wyss December 15th, 2013 and is available on Amazon here.

One thought on “Book Review: The Solitaire Prince by Tyan Wyss”