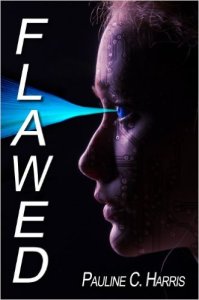 I am going to review the entire trilogy in one post as each book was not very long and the trilogy could have been one book in the first place. Also, I will not be posting full reviews to Amazon/Goodreads as I admire what the author is doing and thought her last book published was stellar (The Hourglass) and the fact that this trilogy was so poorly done shouldn’t count against her as an author or for her future works.

The Mechanical Trilogy was a disappointment to me as a reader but much more impressive when I took into consideration that the author (at the time) was only a teenager. This fact, however, doesn’t make the book better it just makes me consider the book differently. Perhaps knowing how young the author was would have been helpful to know before I read the books rather than after as I would have let a lot more things that weren’t so great slide.

The message Harris was conveying with her trilogy was a good one: nobody is perfect and it’s ok to be flawed. Her dystopian theme was neat, with robots vs. people as the main component. Where things fell apart was the lack of cohesion overall, the plot randomness without many plot points being supported, the obvious lack of an outline, the unreality of the technology and the decisions the characters made, the immaturity of the characters that were supposed to be “perfect” but had obvious lacks of intelligence and ability to think through situations clearly. The author never went very deep into any action. For instance, multiple times the rebel characters wanted to break into the institution and every time they were able to with the first idea they came up with. It wasn’t suspending disbelief but rather there was no reality to the actions and sequences.

I really wish the mechanized humans acted like the ‘perfect’ machines they were supposed to be, except in reality they were rather pathetic in their reasoning abilities and intelligence and understanding. Even normal humans are many times more clever than the ‘perfect’ mechanical characters Harris created. If the androids are so perfect, why do they keep making the most ridiculously stupid mistakes? Sure it moves the plot along, but it’s at odds with the concept Harris is trying to get across. Most of the time the characters just went along with everything, didn’t question things, didn’t think out the possibilities, and didn’t try to escape. Much of the second book was the group of rebels trying to escape from the institution creators and robots over and over. They were just reacting to the situation and not learning from any of their experiences.

The world they lived in never felt real. The author didn’t bring the far-fetched concept (perfecting humans by making them androids) into reality. She also never defined how her magic-like technology could even exist and there weren’t other examples of futuristic technology. Mechanical was isolated.

The writing itself displayed many amateur mistakes that popped out like using frequently the words, “just then,” “as I was,” and “suddenly.” Still, there was something that compelled me to read all three books (could be the short length of each one individually) and I wanted to stick it out for an author that truly amazed me with Hourglass. I recommend skipping this trilogy entirely and going straight to her truly finessed work.

This trilogy was published by Fire and Ice Young Adult Books and is available on Amazon here.