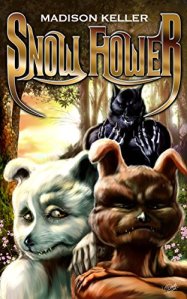 A YA Fantasy Novella published by Hundeliebe Publishing (12/21/14)

“…she wasn’t content with always being the under-dog just because she’d been born small.” (Kindle Locations 897-898).

Arara doesn’t want to go to school where she’s bullied and belittled by the confident and large alpha pup, Kerka and his followers. Arara has a special ability to hear others’ thoughts, but that won’t help her win any fights. Until she finds out she has another special power, she does everything she can to avoid going to school, but she could use a lesson or two in paying attention and following directions.

It’s so interesting to see a society where fighting is not only allowed, but encouraged. Since this is a society that is based on dogs/wolves, this makes sense, since alphas must establish themselves and everyone knows their place in the pack. Not so with underdog Arara. Though she is destined to be an omega, she wants to be an alpha-guard. The only hope she has to win such a high placement in the pack is through her newly discovered ability to use her mind.

Arara is hard to like at the beginning of the story. She’s impulsive, scared, reckless and can’t get her act together. She doesn’t listen or follow directions, even from her father whom she loves. She whines and ultimately acts like a very young pup. Cue the lesson, which she ignores because of her own stubbornness. She won’t take bullying sitting down, but she knows she can’t beat the bigger, stronger, and arrogant Kerka. But will getting back at him make her feel better? Will it solve all her problems? Arara has to learn the hard way that anyone can be a bully and that it’s not best to get revenge. I loved how Arara was able to finally take the lesson of the story to heart by the end of this novella.

Disclaimer: I received a free copy of this book from the author and this is an honest review.

This novel was published by Hundeliebe Publishing on December 21st, 2014 and is available on Amazon here.