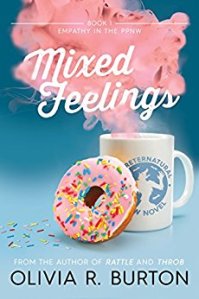 “As I munched irately on my tangy, chocolaty, wafery bundle of deliciousness, I considered the last week, wherein I’d been hired by fairies, bewitched by a demon, nearly seduced by a werewolf, kidnapped by a vampire, and rescued by my gun-toting best friend. All things considered, sharing pizza and wine with Mel hadn’t been the worst thing to happen, but I wasn’t going to tell Chloe that.” (Page 188).

Gwen uses her empathy ability to help her therapy clients. She’s approached by the same two characters who announced her ability weak when she was a child. This time they think she’s up for the job: of helping rescue some missing kids. Gwen, along with her best friend and admin Chloe and the horn dog werewolf PI Mel, will drop all their current clients so they can find out who’s nabbing these kids and stop some future kidnappings as well.

Gwen’s obsession with donuts, sweets, and sugar is hilarious. How can someone consume that much sugar without it adversely affecting them? I’m not sure it’s possible, but I don’t care. Gwen is not the most amazing hero and she’s helped almost every step of the way to save the kids. She herself needs saving every now and then. It is her gift that is more useful than herself at times, but her can-do and sarcastic sugar-loving attitude are hilarious to watch as she bungles along. Besides, she’s like any one of us, right?

I had a hard time getting into this book and kept putting it down until about halfway through. If you like urban fantasy, you probably won’t have this same lack of connection that I did with the plot and characters.

Not all questions were answered in the end and I’m very curious to see what happens with Chloe, the best friend, in subsequent books.

This novel was published by Peacock Deceiving a Suitcase 05/31/2016 and is available on Amazon here.