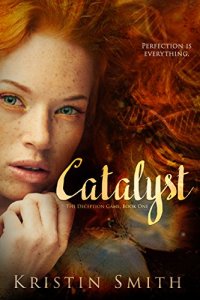 Sienna lives in a world where almost everyone around her has been genetically upgraded. She is shorter, plainer, and all around normal. But her normal world gets shattered when her she finds out her father didn’t die of natural causes. It is up to her to support her family – her mother and young sister – as she tries to figure out who was behind her father’s death. Before she can even begin to uncover these secrets, one of her side jobs goes awry and she’s in hot water with the government. Her life goes from barely manageable to disaster when her mother is taken away by the government and the only way to get her back will be to join forces with an extremist group.

This book was a nonstop adventure ride with a lot of action packed scenes. It was the Chosen One crossed with a Love Triangle mixed with some Dystopian thriller goodness. That being said, I did think it was too easy for Sienna any time she faced adversity. She was always getting out of any situation! Her triumphs, especially against an organized body like the government, seemed a bit too easy.

I loved Sienna’s spunk and positive attitude. She never had negative thoughts regarding her own possible failure and she never dwelled on the what ifs because she was a woman of action! She was always brave and fearless. In her last year without her father she had to learn to be self-reliant and resilient, because her mother was not able to provide and support the family. We don’t see Sienna grow during this time period, but we do see her on the other side as she faces all sorts of problems and difficulties.

I liked that Zane existed, even though he didn’t feel fully formed. I liked that there was a love triangle in this book because it added some more complications to Sienna’s already complicated life.

This novel was published through Clean Teen Publishing on 11/21/2016 and is available on Amazon here.