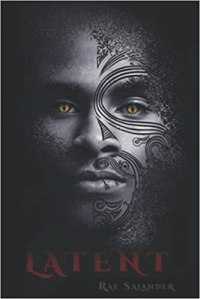 First reviewed through Reedsy Discovery as an ARC

Aliens live among humans – but relations between the races aren’t perfect. Arwen isn’t certain that everything is perfect even though she has a fiancé, best friend, and a job prospect. Her life is shattered when she’s kidnapped by aliens and held against her will in an alien prison. Though they don’t always treat her well and don’t always understand the needs of humans, especially since they have different anatomy, Arwen can’t stop thinking about her captors. Fate and what happens to her may come down to her very DNA.

Latent is categorized as a dark dystopian romance. I did not get the sense that the world Salander builds in this novel is dark or that it delves too deep into dystpoia. Yes, there are aliens and no, they don’t live in harmony with humans but Arwen’s story is the focus of the book. Arwen’s story is dark. Trigger warning that this novel contains multiple rape scenes. A lot of this book read like literotica and if that’s your thing you might really enjoy this fictional work. The characters refer to rape as violence but don’t explicitly name it as rape. Perhaps in this world the definition of rape is different but both Arwen and the aliens acknowledges that this violence against Arwen is wrong.

The Descriptions of the aliens were the perfect length – enough to give me a sense for what they looked like without dragging. The book’s plot was also well-paced and didn’t drag.

I really like the olfactory sense use in this book, especially to differentiate between some of the main characters. The author used these differing scents cleverly and really made the world come alive for the senses.

There were a number of missing dialogue tags and some issues with the dialogue formatting. Paired with the unique otherworldly names that I couldn’t pronounce and some of the sameness between characters (especially those of the same species), I was often confused over when someone was talking and who was talking. I also didn’t differentiate between several of the aliens for quite some time and wasn’t sure which one had done certain actions. This story features multiple POVs but I felt at times that the aliens‘ POVs weren’t differentiated enough and the plot moved fast enough that several of the aliens felt the same to me.

The book could use a good once over by a line editor, especially regarding those dialogue tags. Also – the written out contractions were distracting in the beginning of the book.

That being said, I couldn’t seem to look away from this book. It was oddly fascinating to me and it’s fast pace kept me reading until the very end.

This novel was published by SK indent on 05/22/2021 and is available on Amazon here.