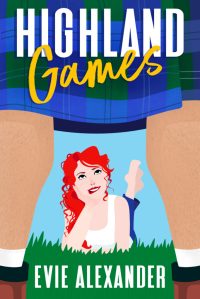 “Zoe had never seen such perfection before. He was made by mountains, forged by fire, washed by oceans and blessed by the gods.” (Kindle Edition, 31%).

Zoe suddenly inherits a cabin in the woods near a small town in the Scottish Highlands when her great-Uncle dies. Without hesitation, Zoe leaves behind her safe life as an accountant in London as soon as her lease is up. Her childhood summer with her Great Uncle was the greatest, happiest time of her life. But the cabin isn’t the same as it was back then. It’s in less habitable shape than she remembered, with no electricity, water, and no toilet. Not to be deterred, Zoe won’t let anything or anyone get in her way of fixing it up. Rory thought the cabin would be his and his plans to fix it up before the end of the year come to a halt when he finds a surprise city woman claiming it as her own. What can he do to get her to leave?

I love books where the heroine is out of place, new, and facing a big project when she unintentionally meets the love interest in a surprising meet-cute. The odds are stacked against her succeeding and problems seem to crop up right and left (along with the handsome hunk). Highland Games really delivers exceptionally on some tried and true rom-com tropes such as Fantasy Location, Monetary Leaps of Faith, Kindly Townspeople, Shirtless Hero, Almost Losing it All, and the Central Project is a Metaphor for Their Love. This book reminded me of the Netflix movie rom-com Falling Inn Love. It’s a steamy feel-good casual beach read.

The romantic element is what makes this book so good, especially the slow buildup of the enemies-to-lovers romance that makes the eventual romance so very satisfying. After at least half the book waiting in suspense for the first kiss, the first touch, you will be rewarded with quite a few steamy sex scenes. These scenes were well written and held my attention throughout (I’m known to skim through sex scenes).

The author has the romance beat structure down solid and the pacing is excellent. Every scene was satisfying from beginning to end. The climax felt real and well integrated into the plot of the story and the ending was very satisfying.

I loved all the characters. They were all so well written. The main characters, Zoe and Rory, seemed like such amazing people, but still relatable as humans. I couldn’t get enough of both Rory’s POV and Zoe’s POV and I really enjoyed the switching POV between Rory and Zoe as they each told their side of the story. The way Zoe describes Rory, especially at first, is hilarious.

Both Zoe and Rory have a purpose outside of the slowly building romance. They each also had their own backstory that made them very compelling. I really liked how both main characters were completely independent people and didn’t need the other to complete themselves, which made their love even more compelling.

This novel was published by Emlin Press on 10/15/2021 and is available on Amazon here.

Evie Alexander is the author of sexy romantic comedies with a very British sense of humor. She takes a method-approach to her work, believing her capacity to repeatedly fail at life and love is what has given her such a rich supply of material for her writing.

Her interests include reading, eating, saving the world, and fantasizing about people who only exist between the pages of her books. She lives in the West Country with her family.