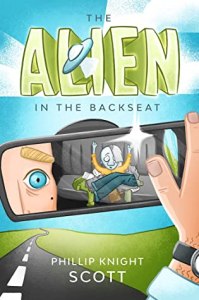 The Alien in the Backseat by Phillip Scott

Jake doesn’t necessarily lead a boring life, but he has his routine. Hang out with his girlfriend, have a beer at the local bar with his best friend, and go to work. Then the inevitable happens and his girlfriend breaks up with him. Jake still has routine nights with his friend and a locally crafted beer as well as the usual at work. Jake accepts his life for what it is, until he discovers the alien in the backseat of his car. Upsetting his typical day, Jake decides to seize this opportunity and take a road trip with the alien. It should be simple to drive from North Carolina to Florida, except this trip is anything but routine. Jake already took a leap of faith when he agreed to bring the alien to Florida, but he’ll start to doubt his decision and the alien when he finds out more than just the feds are in pursuit.

The Alien in the Backseat is a delightful space comedy/road trip that takes place almost entirely between North Carolina and Florida. The writing is concise and the plot is straightforward and fun. This story is told by several characters, but the main character is Jake Whitman. He continuously tells the reader that he likes his routine and isn’t one to take chances or put himself out there, yet his actions speak differently. Jake wants to break out of his routine life. He wants to have an adventure, but he’s never really pushed himself before. The alien that randomly chooses his car to take a nap in is just the push Jake needs to let go of his daily habits. He already lost his girlfriend, so what else does he have to lose? Jake keeps telling us that he’s uncomfortable in the situations this road trip keeps thrusting him into, but he does seem to handle disaster and aliens quite well. I enjoyed the contrast between how Jake viewed himself and how he acted. Some chapters featured other characters’ points of view, like the reporter who is also stuck in a dead-end job, a federal agent, and an alien. These chapters helped to create more tension and elevated the humor present in the back and forth between characters.

The writing style immediately caught my attention. From the first page, I was hooked by the witty use of words and phrases. The prose was delightfully entertaining. The first chapter was the perfect starting point to the narrative. The narrative style and the presence of aliens reminded me of Hitchhiker’s Guide to the Galaxy by Douglas Adams. Science is not at the forefront of this science fiction novel, but instead, the novel focuses on a fun story and the humor in the situations and between the characters. Sometimes the deadpan delivery was so surprising that I had to laugh. If you enjoyed the humor and the outrageous aliens in the Men in Black series, you will surely appreciate this book’s humor.

Jake (and by extension the author) express themselves in a blend of sarcasm and wit that comes across naturally and not at all in a pretentious manner. When we meet the alien and he does come across as pretentious, it is all the more hilarious. The alien is so aggressively outgoing and is written perfectly. The author is able to write the perfect blend of detailed descriptions with dialogue and action. The subtle continuity between chapters was simple yet ingenious. The ending was well set up, made sense to include Jake and his friends, and was wholly satisfying to read.

This novel was published by Independently published 10/16/2020 and is available on Amazon here. 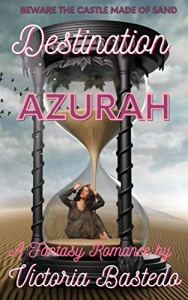 Romiya is determined to uncover the secret to her uncle’s mysterious and amazing sandcastle builder. After his sudden disappearance years ago, Romiya has been determined to uncover its secret and perhaps learn what actually happened to her uncle. Suddenly Romiya gets a breakthrough when she sees a sinister face stamped into the sand, but the other scientists don’t believe her. It will take much more physical evidence to convince them of what she saw overtaking every single grain of sand. Her bodyguard couldn’t protect her from the face’s attack, but he’ll help to whisk her away from the beach and the desert while she figures out her next move. When he resigns, Romiya will also see him in a different light.

I loved, loved, loved that every time someone refers to Romiya as a, “girl” she corrected him! This is such a pet peeve of mine in books and real life. Romiya even explains that if Ruedolf is no longer referred to as a “boy” then she should not be referred to as a “girl.” Thank you, Romiya!

The fantasy element – sand and time and alternate worlds was well described and very interesting to read. Every time that Bastedo dips into fantasy/science fiction, I’m captivated. Much like her novel The Kiss of the Blue Howler, this book is full of imagination and a new perspective. I was mesmerized by her descriptions of sand and memory and loved how she integrated that into a thoughtful and well developed romance/action story.

I thoroughly enjoyed this mashup of romance and fantasy. It was a fun, easy read with an adorable romance, a hint of mystery, and a strong female STEM leading the way!

(READ ON FOR VAGUE SPOILERS)

The plot was well paced and there was the perfect amount of action. However, I did find fault with the characters in the alt-world for letting the newcomers walk into evil hands! This was most likely on purpose to push through more drama, but it felt at times unrealistic (just like many blockbuster action movies). I also felt like the nighttime romance scene was out of place.

This novel was published by Amazon Digital Services 09/17/2020 and is available on Amazon here.