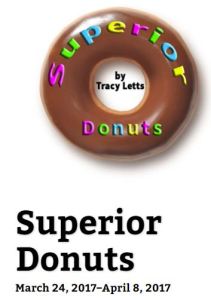 After a visit to Georgia’s Bakery – where I snacked on the delicious cronut – I went upstairs to the Village Theatre to see the Superior Donuts production! 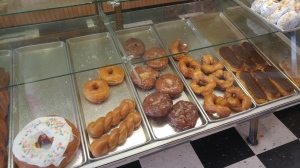 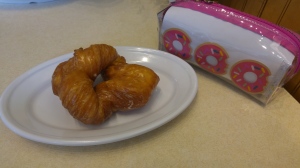 My last experience with community theater wasn’t that great, so I didn’t have high expectations going in, however, just seeing the set I could tell that this show was going to be good. Care and detail had been put into the set. The walls of the donut ‘shop’ were made to look old and outdated. They even had a fake view to the outside with an open sign and everything!

If you get a chance, I would highly recommend this play!

Full of laughs and catch you by surprise contemporary phrasing (aka adult language), Superior Donuts was highly entertaining. The play itself contained great dialogue and character interaction and while some scenes were a bit unusual, the play as a whole was very well written. The Valley Center Stage was a delightful little theater. No seat was a bad seat and the actors’ voices carried all the way to the back. The actors themselves carried the play from delightful to amazing. Their delivery and timing were impeccable. They even ate donuts and drank coffee during the scenes! My favorite parts of the play were the fast quips making fun of everything from Starbucks to donuts to the way the main character, Arthur, dresses. Grab yourself a donut from the concession stand (courtesy of Georgia’s) and settle in for a night (or afternoon) of laughs and entertainment with this comedy drama.

Description from the website: Superior Donuts takes place in the historic Uptown neighborhood of Chicago, one of Chicago’s most racially diverse communities. Arthur Przybyszewski, a despondent, aging 1960s radical owns a run-down, dated donut shop that has been in his family for sixty years. New employee Franco Wicks, a young, enthusiastic black man, inspires to infuse new energy into the shop while Arthur remains detached from investing in his business and life. Arthur grapples with his past while Franco, trying to find footing in his own life, has his own serious challenges.  This provocative comedy drama explores the challenges of embracing the past while celebrating the redemptive power of friendship.