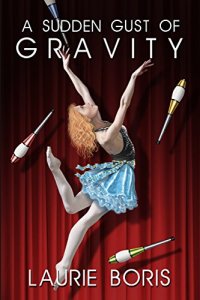 A Sudden Gust of Gravity by Laurie Boris

Christina grew up practicing magic tricks with her father the magician, but now she is a mid-twenties waitress. She is a bit anxious to get on stage after what happened to her father. It is also nearly impossible to pick up a gig as a female magician. After an impromptu visit to a magic shop, the opportunity to work as the assistant to Reynaldo the Magnificent drops into her lap. Should she take the job? Will being a pretty prop to a some other magician even lead to her own career in magic?

The characters were mesmerizing. Christina was so strong and such a great lead; however, her flaws pushed her into questionable decisions. Why would she stay with Reynaldo? Boris shows us the progression of a relationship from attraction to dissolution so realistically and so well. Reynaldo was such a unique character as well. We had glimpses into his mind now and then that were so fascinating. Why would he do the things he did to Christina? Devon, the Korean-American medical student was the crack in Reynaldo and Christina’s relationship, that kept pushing and pushing. Devon’s relationship to his nephew was such a relief to read after Reynaldo and Christina, like a breath of fresh air.

Though this book presents a love triangle, it is done so cleverly that you feel like you are reading some fresh new type of romance.

This novel was published by Amazon Digital Services LLC on 11/07/15 and is available on Amazon here.