Daniel is a mid-thirties art teacher with a terminal illness. He is passionate about teaching, art, and maintaining his privacy. He has lived for years in an upstairs apartment to his downstairs landlady and her daughter, Caitlin. Caitlin grew up with concern for Daniel that has grown from protectiveness into her first real crush. Daniel starts teaching art to Caitlin, even giving her private lessons. As time goes on, Caitlin’s feelings for him grow stronger, even as Daniel’s condition worsens and he starts a relationship with a lonely married woman.

The way Boris describes breathing in this book brought me back to the days when I tripped my asthma and couldn’t draw enough oxygen. When the tendrils of panic would take hold. Maybe other readers who have never felt short of breath, short of oxygen, will also be able to sympathize and not just empathize with Daniel through these vivid descriptions.

The story itself was very interesting and I enjoyed both Daniel’s and Caitlin’s perspectives in their relationship.

The ending was very well written. It was truthful and abrupt. It was emotional yet inevitable.

This novel was published by Laurie Boris on 11/18/13 and is available on Amazon here.

The Kitchen Brigade by Laurie Boris

In a not-so-distant future Russia occupies America. Travel is limited. Employment is limited. Freedom is limited. Valerie grew up privileged as the daughter of the secretary of state but is now forced to cook for the army in this occupied-America. With her culinary background she impresses a Russian general and is given the ‘opportunity’ to work in his mansion. Christened “Three” she works with a head chef and four other chefs in the kitchen during the day. This opportunity involves being led to her work space in handcuffs every day, bullied and belittled by the guards and the guests at times, and forced to work for the same men who killed her father and are destroying her country’s freedoms. She knows she will not do nothing, will not work demurely, will not stand idly by if an opportunity presents itself.

Though supplies may be scarce, the kitchen brigade bring life and love to the dishes they prepare. Head Chef Svetlana says some very poignant remarks about cooking and food throughout the novel. It is their love of food and their passion for cooking that bring life to the kitchen and hope to their hearts. It is this passion that seems to lead them in other areas of their lives and gives them the willingness to stand up for what they believe in and the need to act when they can.

I enjoyed all the characters very much. Head Chef Svetlana seemed so complex when viewed from both her point of view and from Valerie’s point of view combined. Who is Svetlana really and what side does she work for? Valerie is very courageous, even in the beginning she does not yield instantly to her fate. Yet, she does not fight when there is no reason. She is industrious and clever. Two seemed the most complex character with the least explanation or backstory and I really enjoyed this slight ambiguity. In the height of chaos, what would she do? She is the loose cannon that could crumble Svetlana’s plans and yet Svetlana loves Two like a daughter. I adored Four so much! She was so cool. Each of the women in the employ of Svetlana in the kitchen were full of personality.

I enjoyed the details of running the kitchen, including food preparation, wine pairing, cleaning, herb gardening, and more.

This book had great suspension and tension throughout. The ending came suddenly and some of the action I couldn’t quite picture but I enjoyed reading it nonetheless.

This novel was published by Amazon Digital Services LLC on 01/10/19 and is available on Amazon here.

A Sudden Gust of Gravity by Laurie Boris

Christina grew up practicing magic tricks with her father the magician, but now she is a mid-twenties waitress. She is a bit anxious to get on stage after what happened to her father. It is also nearly impossible to pick up a gig as a female magician. After an impromptu visit to a magic shop, the opportunity to work as the assistant to Reynaldo the Magnificent drops into her lap. Should she take the job? Will being a pretty prop to a some other magician even lead to her own career in magic?

The characters were mesmerizing. Christina was so strong and such a great lead; however, her flaws pushed her into questionable decisions. Why would she stay with Reynaldo? Boris shows us the progression of a relationship from attraction to dissolution so realistically and so well. Reynaldo was such a unique character as well. We had glimpses into his mind now and then that were so fascinating. Why would he do the things he did to Christina? Devon, the Korean-American medical student was the crack in Reynaldo and Christina’s relationship, that kept pushing and pushing. Devon’s relationship to his nephew was such a relief to read after Reynaldo and Christina, like a breath of fresh air.

Though this book presents a love triangle, it is done so cleverly that you feel like you are reading some fresh new type of romance.

This novel was published by Amazon Digital Services LLC on 11/07/15 and is available on Amazon here. 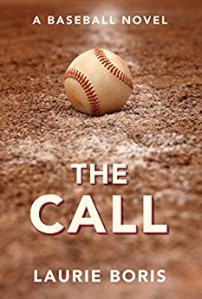 The Call: A Baseball Novel by Laurie Boris

Margie is the first female umpire in the minor league of baseball – but it was an uphill battle. Without support from some progressive folks, she never would have made. Every step of the way she is disrespected, insulted, and worse because some people think baseball is a man’s world.

The baseball scenarios went right over my head, but because of the excitement of being a part of the game, I didn’t care. I could feel the tense atmosphere in the stadium when the ball connected with the bat. I could feel the sweat from the players. I could sense the emotion and love Margie felt for the game and her role in it.

I loved Margie. I loved her conviction and her love of baseball. I loved her stubborn personality and her willingness to learn from her mistakes. She was an amazingly full and rich character. She is an excellent role model. She sticks by her calls.

I absolutely loved every scene with Margie and Wes. Their friendship was awesome and I liked that Margie had a relationship with a man that was not romantic.

This novel was published by Amazon Digital Services LLC on 9/01/07 and is available on Amazon here.