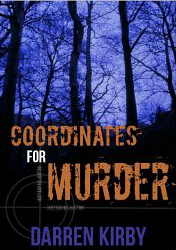 Sammy and John are two friends who are in to geocaching. They plan a camping trip out into the woods to find a new cache – a multi-cache – but when they find the first part they are surprised by something they have never seen before. After following the series of caches deeper and deeper into the woods, they get so much more than they bargained for. They find the Woodsman, a sick creep bent on their destruction. Scenes of torture full of blood, gore, and horror-type things occur. Tied up and bleeding, will Sammy or John get out of the lair of the Woodsman’s elaborate setup?  They were the first to find. They might be the first to die.

The start of this book was promising. Sammy is a fun character who likes to mess around with his landscaping crew. There is a fun action sequence to start the book off on its toes, creating a mild amount of tension and creating a fun atmosphere. The dialogue was interesting and light. The characters were shown through their actions and words. The reader got to see a fun competition.

The title of the book contains the word ‘geocaching.’ The description is of a dashing cache hunt and a daring hope for escape and rescue. The real description should account for the miles of lost words describing John getting lost in a cave and the overlong scenes depicting the mad Woodsman’s maniacal torture. The author does a great job with these sicko scenes, but it was not what I was looking for nor what I thought the book was going to contain as it wasn’t in the book’s description.

There is something wrong with the Woodsman. The reader is not given much information into who he is or where he came from. The reader gleans from his actions and what he says that the reason he does what he does is because he is -presumably- a psychopath. He is only described as a large muscled man. He has a peculiar way of speaking, an intriguing bit of slang to make me think there is more going on than we are told. The author gives us a glimpse of this enemy early on and he is accompanied by a shorter companion who disappears immediately after with no indication of why this happened or where he went.

There are several plot inconsistencies that had me confused. Why wouldn’t the two boys take one vehicle to get to the campsite? If the Woodsman could find something lethal in the lair, why couldn’t Sammy? Why would the boys think there might be another cache when they’re in the middle of nowhere?

One of my chief criticisms is the boys’ lack of fear or any emotion similar. From the very initial creepy part, they are not at all worried or afraid or reticent to continue. When they meet the Woodsman they are not afraid, they only react to what he does. I’m sure they must be afraid, but the author never describes their fear it or tells us how they are afraid.

For me the ending was unsatisfying. Was this a series I didn’t know about? So many questions to answer, but even if it were a series I wouldn’t want to continue reading.

This novel was published through Createspace Independent Publishing Platform 02/18/2012 and is available on Amazon here.