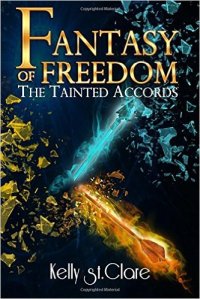 “If I can go through with the next few moments, the Accords will be tainted no longer. They will be a code. A practice. A change in the way we live our lives.” (Kindle Locations 178-179).

This fourth and final book in the Tainted Accords Series follows the final battle between Osolis and Glacium and the resolutions of all the subplots. Olina is fast recovering from Book 3’s near death fight and ready to take on her mother and the role of leader of Osolis. War is imminent, but victory is the only way peace can be obtained for all races.

This was a blockbuster of a novel and it was nearly perfect in every way. The only change I would make would be to alter Jovan’s personality to be less of a barbaric King in the way he sometimes (oftentimes) manhandles Olina.

The plot was seamless. Everything fell into place. It was one of the most satisfying endings to a series that I’ve ever read, especially for an Indie book. I am blown away by this breakout series and this breakout last novel. Though the plot throughout the series meandered a bit (Fantasy of Frost), the characters and the world are so well developed that I didn’t care.

The dialogue was spot on. There were challenges and setbacks. The characters made mistakes and overcame hardships. I could see the grit, sweat, and tears and I was right there with them strategizing and feeling the love between Jovan and Olina.

This series has gotten better with each book and this was a fantastic and phenomenal finale.

This novel was published by Kelly St Clare on August 22nd, 2016 and is available on Amazon here.