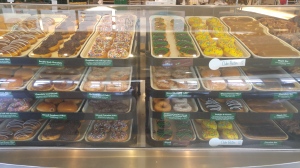 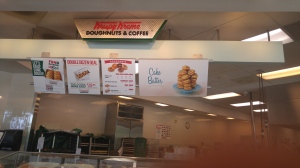 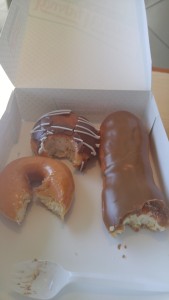 The chocolate and maple glaze are truly atrocious and too sweet. The yeast flour would be delicious if not covered by a too thick layer of sickly sweet glaze. Not worth the price of $3.85 for three donuts.  Happy 80th to the original glazed. The worst fresh glazed donut I’ve had.

The shop is definitely cool and they display their heavy duty looking machinery through display glass and you can watch the donuts being created while you enjoy your too-sweet donuts. 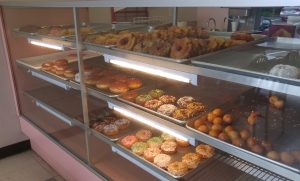 the glazed donut holes looked exceptionally nice but the glaze/donut tasted mildly chalky lke they weren’t made from fresh oi. The boston crème definitely tastes like there’s something flavoring the oil they cook the donuts in. I’m not a fan.

I wasn’t impressed with this donut shop.

This little shop is small and clean with normal-sized donuts. There is nothing amazing or spectacular about this shop. If you want a donut that’s fresh and decent, then this is a great place to get a donut. Don’t expect overly large or intricate or specialty donuts here, just the usual.

I liked how the Boston Creme had a full serving of cream inside that was spread out throughout the inside of the donut so every bite was creamy and delicious. The chocolate glaze on top was not overly sweet. It was the perfect blend of sweet chocolate on top and cream in the middle with the right amount of dough. 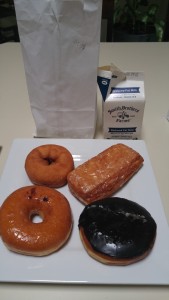 I almost thought I was walking into a Krispy Kreme! This place is modern and very clean and open. The counter with all the donuts was so large that it was quite a bit taller than my head and I had to stand on tiptoe to see the donut employee behind the display case. Donut Factory has so many different choices! I had high expectations for the crobar, their most popular and shop specialty, but thought the glaze overpowered the croissant dough. I couldn’t taste anything under that powerfully sweet glaze. I would not order the crobar again. Donut Factory celebrated their 2-year anniversay May 7th, 2016.

Out of the three donut shops in Lynnwood, I thought Donut Factory had the best glazed donut! The glaze was not a milky crystallized glaze, but a sticky, dewy, sugary sheen that tasted phenomenal. The dough itself was slightly sweeter than normal and complemented the glaze on top.