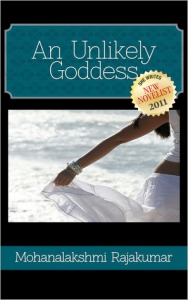 An Unlikely Goddess by Mohanalakshmi Rajakumar

“A straight man who won’t sleep with you because he wants to be serious? Marry him,” Manoj said, “Be happy and have lots of babies.” (Kindle Locations 3601-3602).

An Unlikely Goddess focusses on the cultural traditions of an Indian family in both India and America, with a specific focus on the first born daughter Sita. From her very birth, where she was supposed to be a boy and not a girl, she disappoints her mother, father and herself. She must figure out what she believes in order to find her way in a world where she is considered an outsider. Sita’s family is seen by Indian relatives and neighbors as the opulent immigrant family in America, where wealth is taken for granted, but their reality is far different. Sita’s family struggles to stay afloat in America and this borderline poverty affects Sita and her own struggles to be American and fit into the unforgiving expectations of the American schoolchildren.

I will jump right in and say that Mohanalakshmi Rajakumar is like the South Asian version of Amy Tan. Rajakumar’s story in Unlikely Goddess is about a young girl growing up as a woman, an Indian immigrant displaced into a vastly different culture than the one she grew up in, parents who want their children to stay true to their culture and traditions, the oppression against females and their independence, and more. Unlikely Goddess is a brilliantly written, masterfully told, powerful story about Sita.

Rajakumar was able to weave a story that was as fascinating and informative as any of Amy Tan’s novels about Chinese immigrants or turn of the century China. An Unlikely Goddess was a story alive that gave me an unusual insight into Sita’s life. Sita was a fascinating character. Her story was the main focus, but through her the reader is privy to the angst a teen feels in America as culturally and ethnically and financially set apart from her peers. Sita’s discomfort was the reader’s discomfort. Rakajumar is able to translate the book’s emotions so that the reader is involved in Sita’s life and her emotions and desires.

It is not just Sita that the reader feels compassion and understanding toward, but also her mother Mythili. Through books like these readers can gain a true understanding of what it’s like to be thrust into an environment where you are the one apart, where you are the one that is different, where expectations are placed on you for your gender and your culture and your skin color.

This book blew me away and I appreciated Rajakumar’s prose and style and story so much that I plan on reading everything else she has written.

This novel was published through Createspace Independent Publishing Platform October 14th, 2013 and is available on Amazon here.