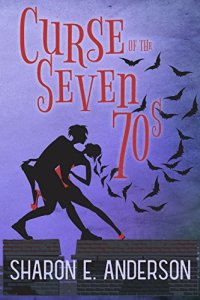 Curse of the Seven 70s by Sharon Anderson

After inheriting a cottage from a long lost relative and being dumped by her fiancé, Cassandra moves into the presumably empty house with her woe is me attitude. Attacked by a pelican and agreeing to move her ex’s fifty plus boxes of research into her own place for storage, Cassandra decides to break into the 50-year old scotch she found. Then she discovers a skeleton behind a wall with a stake in it and removing the stake brings the hot, mildly geeky, ultra-romantic and protective vampire Varo to life.

This book showcases perfectly the concept that if someone thinks they can get away with it, they’ll do it. The ex and his new girlfriend think they can push Cassandra around and take her time, space, and money so they use manipulations that have worked in the past to get what they want. And at first, it works. Cassandra still thinks Howard loves her and will dump his new silicone girlfriend and so accepts to store his research at her house and then moves many many boxes down to her own basement. And then she meets Varo and finds more than just research in Howard’s boxes.

Varo helps bring out Cassandra’s confidence by being uber hot and very much into her and her alone. This is where reality is suspended and the hilarious character actions and plot details become much more interesting and fantastical.

This novel was published by Ravensea on June 19th, 2016 and is available on Amazon here.