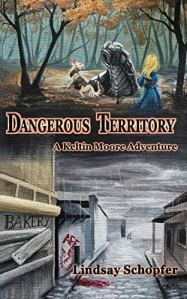 Keltin Moore is a beast hunter starting his own beast hunting company with two of his faithful companions: Bor’ve’tai the Loopi and Jaylocke the Weycliff Wayfarer. Their first job takes Bor’ve’tai and Jaylocke away together to hunt a smoke beast while Keltin holds down the office by himself. Not even a day later Keltin is tasked with an emergency beast hunting job and a secret assignment. Without being able to wait for his companions, he is off north to Krendaria once again.

Keltin Moore’s world is much like stepping into the fictional wardrobe of Narnia with all sorts of creatures, most of them unfriendly. The Beast Hunter’s monsters are varied in form, function, and appearance. I really enjoyed the imaginative world building of the monsters themselves and the weaponry made to defeat them. The author gives the reader the perfect amount of description for both amidst the action of the hunt scenes.

Much like with the other Keltin Moore book I read, the start of the novel builds the world slowly, re-introducing the reader to Keltin and the new problem he must solve. Keltin himself has grown into an entrepreneur yet he remains humble. I really enjoyed his embarrassment and the way he would normalize himself anytime he was being described overly heroically. If I had an Uncle in a fantasy novel, I would like him to be Keltin.

This book reminded of the narrative ease of the Tarzan novels and once the main plot was revealed, I was hooked into the story and didn’t put the book down.

This novel was published through Amazon Digital Services 06/01/2019 and is available on Amazon here. 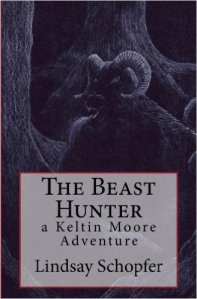 “He deeply resented how his difficult, though simple life, had become complicated by the problems of groups and nations that he had never visited or even seen before.” (Kindle Locations 2178-2179).

Keltin Moore is a beast hunter in a world where beasts roam far and wide. Usually they are isolated, but to the north in faraway Krendaria they have become a thick problem, keeping farmers from their crops. The local duke has put out a call for hunters far and wide and the bounty is enough to entice Keltin away from local Riltvin, but when he gets there he is told the hunters must work together to thin out the plague of beasts. Will the Beast Hunter be able to work with others or will politics between races of hunters cause a rift greater than that created by the presence of the beasts?

Keltin Moore’s world is much like stepping into the fictional wardrobe of Narnia with all sorts of creatures, most of them unfriendly. The Beast Hunter’s monsters are varied in form, function, and appearance. Not everything is known in this world. Schopfer is slow to build up his world and introduce the main elements of the story but when the action gets going it will suck you right in, even if fighting monsters is not something you usually read.

Schopfer explores different concepts in his story, the one that specifically interested me was the theme of ‘species’ discrimination, the interactions between different types of human or human likes. I like the buildup of different types.

There are hardly any women, but in this type of society it seems almost genderless as the biggest divide is by ‘type’ of person. There is the typical political and war like goings on, almost like the campaigns of Mulan with an impossible enemy that can only be brought down through the joining of efforts of an unlikely army.

The author brings real emotion to the scenes with thoughtful introspection by Keltin of the situations he finds himself in.

If you liked the heroics and otherworldly real feel of Rob May’s Kal Moonheart Series you may find you enjoy the Keltin Moore Adventures.

This novel was published through Amazon Digital Services May 8th, 2014 and is available on Amazon here.