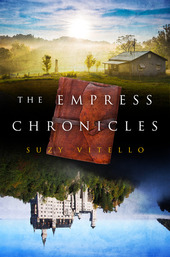 The Empress Chronicles continues with the twining stories of the Empress Elisabeth of Austria from 150 years in the past and Liz from present day Oregon. They are connected through the keepsakes: a diary and three lockets. Empress Elisabeth, affectionately known as Sisi, has accepted her fate to wed the emperor and give up on her previous crushed romance. Liz knows that history is not kind to Sisi and writes in the diary, telling Sisi not to marry the emperor. Sisi, at first doesn’t understand, but gradually comes to believe both in the diary’s ability to cross time and the advice that Liz of Port Land gives her. Meanwhile, in present day, Liz has her own issues to contend with but can’t let go of the diary or in her unfailing faith in the fact that she could help Sisi and change history forever.

It took a while to get back into the second book of the Empress Chronicles, as the story of the Keepsake continues right where the Empress Chronicles leaves off. Since I had read book one quite a while ago, I had trouble catching up with what was going on in book two, but all the characters I enjoyed were there and all their interesting personality quirks were still in full force. Liz was still very much held down by her OCD, but in a different way. Now she was aware of when it was affecting her and she was trying to overcome her own quirks so that she could ‘engage’ with the world. Sisi is still as dramatic as she was in book one.

Half the book, I felt like Sisi slowed down any action that was happening in the book. In her time, the past, not much happened to a young lady and most of the plot was brought out through gossip and intrigue. Liz, in her modern times, was much more interesting than Siis, at least for the first half and rising action of the story. When Liz decides to intervene in a big way, that’s when both Sisi’s life and Liz’s life jump into action and the story really gets cooking.

I loved all the details regarding the past and all the interesting details regarding Willow and her chosen lifestyle. Willow’s Kombucha-goat cheese farm-lifestyle was fascinating to get a good look at, especially from Liz’s point of view. Sisi’s lifestyle, that of someone in the upper class, in old Austria, was also very fascinating.

Disclaimer: I was given a free copy of this story in exchange for my honest review.

This novel was published by Words in a Hurry 09/21/2015 and is available on Amazon here.