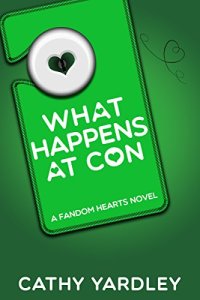 Ani is prepared to spend the next two years in her grad program dealing with a sexist adviser and a nearly insurmountable amount of work in addition to her own thesis. After one night of recklessness, one night of abandon, one night of worry-free sex with a stranger Ani still won’t set aside her goals for a fling, but maybe she can find the time for a relationship.

Abraham is starting to feel tired and alone without a partner. One night stands just aren’t cutting it anymore and when he meets Ani, he can’t get her out of his head.

He’ll have to fight to win her over. She’ll have to decide what’s worth her time and energy. Will either of them survive Ani’s thesis adviser from hell?

I read this fast-paced romance in one sitting. As soon as I finished, I wanted to read more.

Yardley reels the reader in with her vibrant characters and their believable problems. I was riveted during the entire story.

I was pleased that Ani wasn’t your run-of-the-mill damsel, but none of Yardley’s characters are in any of the books I’ve read. Ani is such a great role model to read about. She’s a hard-working, nose-to-the grind woman who’s in STEM and going for her doctorate. She knows what she wants and she does what she has to do to get there. And yet society is still there pushing back at her for being a woman in STEM.

Abraham wasn’t a cut and dried male lead, either. Yardley gave him depth. There was much more to him than met the eye and I’m glad Ani didn’t immediately fall for his good looks. Scratch that, because she totally fell for his good looks! Even though she saw him as only his good looks to begin with (I see what you did there Yardley), she eventually saw past his surface level attractiveness to his personality.

This novel was published by RYW Publishing on July 31, 2018 and is available on Amazon here.