Kidnapped and held hostage in the Rockies, a teenage heiress falls for her abductor while her corrupt father and devoted bodyguard fight to get her back. The discovery of true love and dark family secrets turns deadly in this epic coming of age adventure.

Kaya Lowen dreams of living like a normal eighteen-year old, but being heiress to a billion-dollar company has put her life in constant danger. Fiercely guarded by her powerful and corrupt father, she develops close bonds with those who protect her, especially Oliver – a bodyguard who has proven his devotion to her time and again. He wins her heart – until a chance encounter with a mysterious stranger has her questioning everything she believes in. Haunted by true love and reeling from a guilty conscience, Kaya’s world unravels when she’s kidnapped.

Held captive in a rugged wilderness fraught with raging storms, mystical caves and deadly predators, Kaya’s father scours the forest and her bodyguard fights to get her back. But, the discovery of a dark family secret makes Kaya wonder if staying in the arms of her blue-eyed abductor—a captivating stranger with dark secrets of his own – is a safer place to be. At least, that’s what her heart is telling her, her head is saying run…

An epic adventure centered on a smoldering love-triangle, Serenade sings a timeless tale of courage, self-discovery, and life-or-death love that will leave you breathless.

This was it, now or never.

I gathered every single ounce of energy I had and steadied my mind to ignore the pain in my foot and the dizziness in my head. Then, with everything I had, I turned and bolted toward the dense forest. The darkness instantly enveloped me. I could see well enough not to run into tree trunks, but branches caught me at every turn. My head felt as if it was spinning like a top, but I forced my legs to keep going. I could hear the men’s voices yelling at each other in an organized manner.

I tripped and found myself on all fours. Get up, girl. There’s nothing wrong with you—get up…

I made it a few more steps before my head connected with a blue spruce, and then I collapsed in a pathetic heap. My arms were so wobbly I could barely wipe at the gash across my forehead. My body was completely failing me. I prayed to God that the dog would just snap my neck and get it over with quickly…

Human footsteps approached. I gulped in some air and tried to push myself up, but the world tipped on its side and I fell with it. Within moments, large hands had my wrists pinned to the ground. I struggled and fought with everything I had left, which wasn’t much.

His voice created such confusion inside me. I kicked harder.

His body pinned mine to the ground. I could feel tears welling up in my eyes.

“Please, Kaya, trust me. I won’t let anyone hurt you, I promise.” He leaned forward and pressed his sleeve to my bleeding forehead, dabbing and inspecting it closely while I had no choice but to gaze up him. How could this beautiful man be a kidnapper? It just didn’t fit.

“It’s just a scratch; no stitches required,” he said, voice trailing off as his eyes met mine.

We stayed like that for a while: me on the ground, him kneeling over me, and our line of sight only on each other—until an unmistakable sound broke through the tree tops.

“They’ll find me,” I said softly, wondering if Oliver was in the helicopter circling over our heads.

He positioned his arms under my body, and, in one graceful motion, he picked me up and into his arms. “Just don’t run. Promise me that, please. I’ll keep you safe. You have my word. Okay?”

He held me tightly—protectively—waiting eagerly for my reply with turmoil in his blue eyes. My whole body hurt, and admittedly, I couldn’t have walked another inch. The wolves or that beast would have got to me long before Oliver would have. I was at my kidnapper’s mercy, laying helplessly in his arms and falling harder for him by the second.

Heather McKenzie is a Canadian author and Serenade is her first novel. A professional singer/songwriter with five albums to date, she has been telling stories through music for years and pulls from her extraordinary experiences as a musician to fuel her passion for creating Young Adult fiction. A rocker at heart, a mom of three, an aspiring painter, and a lover of animals, she is kept grounded by her husband at their home in Edmonton. 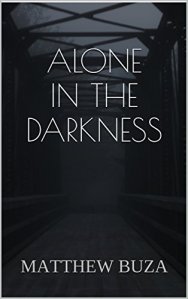 Alone In The Darkness by Matthew Buza

Steven owes a debt he cannot repay by himself and he only has a few hours to come up with the money. The only solution is to take it, but the person Steven decides to rob becomes entangled in his problems. Now it’s a fight to survive.

This story was short and gritty. It reminded me of Breaking Bad with its in depth details on drug production, but within the low end of society. I was shocked at some of these details – like the druggie house. I felt like I learned a lot about drugs, drug runners, drug houses, etc. The story did get weighed down at times with these details, but they were fairly fascinating.

This short novel kept me in suspense and I had mild anxiety throughout the entire story as I waited to find out how the kidnapping would resolve. Would she make it out? Would she get the help she needed in time or would she figure a way out on her own? There were just enough obstacles to keep the plot realistic and moving forward.

This novel was published by Buza on April 13th, 2016 and is available on Amazon here. 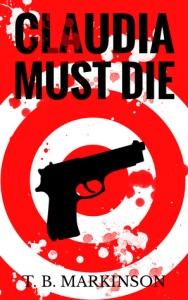 Claudia Must Die by T.B. Markinson

What if you could evade your imminent murder by setting up your doppelganger to die in your place, would you do it? For Claudia, it’s a given that Parker must die. Claudia doesn’t have room for guilt or remorse because Parker seems like she doesn’t enjoy life or have any friends or loved ones. On the forty ninth day of Claudia’s stakeout of Parker Mapes, the hired assassins show up to do the deed and Claudia’s plan seems to be going flawlessly. That is, until Parker’s lover shows up.

T.B. Markinson delivers again with her fourth novel, Claudia Must Die, in a fast-paced comedic story of kill or be killed. Markinson has a way with descriptions and setting a scene to get the reader really involved with the story. The scenes are vivid and authentic. Each page invokes intrigue and keeps your attention. The author catches your attention with the vivid yet simple cover and keeps it from the very first sentence to the very last sentence.

This story was a very funny take on an assassination attempt with a side of attempted identity theft. But it wasn’t all fun and games. Markinson fueled the characters’ actions with real emotions and motivations. She didn’t put in anything extra while giving the story everything it needed. The backstory was written concisely and integrated seamlessly into the plotline.

The characters were larger than life, but believable and relatable. The dialogue was realistic and fun. One of my favorite lines was, “Too many people talk, yet I haven’t met anyone worth listening to.” (Location 565). This story was just too fun and I enjoyed every minute/page of it. It unfolded just like a comedic heist would in a movie. And hey, not everyone has to die.

This novel was published by T. B. Markinson July 13th, 2014 and is available on Amazon here.