Have you joined the release party for Donuts in an Empty Field? Go RSVP now.

Here’s the lineup of my blog tour for Donuts:

June 3 – A Spark in the Dark Blog – https://clrozelle.wordpress.com/

And Oddmall in Everett is coming up this weekend! Be sure to stop by our booth (8) and say hello, maybe take your picture with me.

Local young adult writer, Rachel Barnard, will release the first novel in her young adult For the Love of Donuts series titled Donuts in an Empty Field with Life’s a Book Publishing, June 3rd, 2016 (AKA National Donut Day). Pre-order your copy HERE.

Vanessa hasn’t been the same since her father’s death. A hero until the end, he died saving a restaurant owner’s son from a burning building. Nessa blames the boy, but her best friend Nichole thinks it’s time to let go of the past. In a last ditch effort to break Nessa’s obsession, Nichole hopes signing up for the local food challenge will bust her out of her shell. A single choice defines the road ahead for Nessa. Doing the right thing isn’t easy, but living with the consequences of doing nothing might be worse.

Don’t forget to subscribe to Rachel’s newsletter to receive important updates and promotions, if you haven’t already. Signup HERE

Come celebrate the awaited release of the first book in the For the Love of Donuts series – “Donuts in an Empty Field” by Rachel Barnard,  Online Here

Add the book to your Goodreads shelf HERE 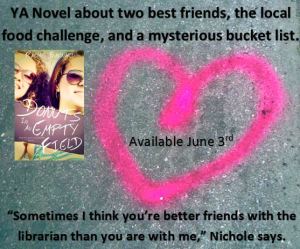 Scripting the Truth by T.A. Henry

“Sometimes I wonder why you put yourself through all this when clearly you knew nothing about the business.” (p. 152).

Lady Margaret Leighton aka Molly doesn’t want to marry whomever her mother approves because she already had her heart broken when the soldier she nursed during World War II vanished. Then she spots his face on a movie poster and she decides right then and there that she’ll do whatever it takes to find him and reconnect. But he’s a famous actor and she can’t even get into the studio without a reason. After failing at pretending to be an actress she finds out that the director’s looking for scripts. Margaret spends a feverish few days learning how to write a script and writing up the proceedings of her time as a QA in World War II. When this gets her in the door, no problems will stop her from finding the missed soldier and her happily ever after, or so she thinks.

How far would you go to see your crush again? She wrote a script about qa’s in the war that went unrewarded and then wrote a new script all about a love story without the war. After rewrites and negotiations she gets herself on set and her crush as leading man. What could go wrong?

Molly is determined, witty, clever, knows when to forge ahead and when you admit defeat. She’s amazingly stubborn when an idea grabs hold of her. She’s set herself up for a rude awakening of a failure.

Great balance between the actual script and the real story so I felt I knew what the script was about and how it paralleled Molly’s real experience without getting too much into the story-within-the-story. It was fun getting some real world and excellent script writing pointers for people who’ve never done it before, like Molly.

The dialogue was amazing, clever, and funny.

Overall this was a delightful novel and I can’t wait to read what T. A. Henry comes up with next

This novel was published through Amazon Digital Services 10/09/2015 and is available on Amazon here.