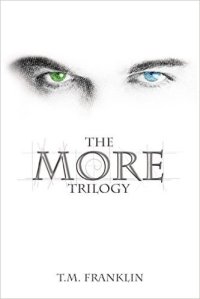 Ava is failing physics. Her professor proposes a tutor at no cost to her and she jumps at the chance, since she needs to pass the class to keep her scholarship. She can’t afford tuition without the scholarship and spends enough time working to make up the difference anyways. Her tutor, Caleb Foster, seems to be everywhere in Ava’s life and she doesn’t much mind, other than that funny feeling she keeps getting that she’s being watched.

The first half of this book was rather boring and I kept waiting for the action to pick up, which it did, with a fury. Suddenly Ava’s life was turned upside down and she was in constant fleeing mode.

Though the book was slow to get going, the ending was much more satisfying, but by that point I was ready to put the series down. The plot twists were too convenient, moving characters where they were needed in the narrative without proper placement within the plot. Characters like Lucy and Ava’s childhood friend were dropped off when Ava’s story took off. The plot just didn’t do it for me. The story wasn’t different enough from all those other “chosen one” novels and the paranormal aspect was not original either. I also didn’t feel like I ever really got to know Ava as a person before she was swept up into her supernatural character role.

This novel was published by The Writer’s Coffee Shop Publishing House on October 3rd, 2012 and is available on Amazon here. 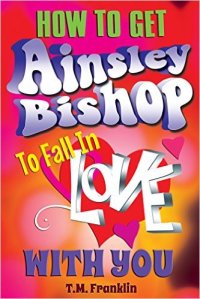 How to Get Ainsley Bishop to Fall in Love With You by T.M. Franklin

High Schooler Oliver is a nerd. He’s a list-maker and a straight-A student. And he wants to win over the lovely Ainsley. Using advice from his family and friends as well as his sure-to-succeed list, Oliver attempts to win Ainsley over. The only problem is that she already has a boyfriend!

Boys will be boys… Wrong! Oliver broke that mold completely. He is sensitive and thoughtful and adorably awkward. Girls won’t always be girls either because Ainsley appears to be shallow at first, but as Oliver gets to know her so do we and everyone can see why Oliver has a crush to end all crushes on her. This novel featured realistic characters, even the ‘bad’ boyfriend. Ainsley isn’t an airhead, she has substance to her, even if she is dating the ‘bad’ boyfriend.

The dialogue is absolutely clever and Oliver’s awkwardness and inner thoughts are hilarious. This book shows such a great, and what I think of as accurate, insight into young men and women in high school.

I love how Oliver received a lot of good dating advice… from mothers and fathers and friends and siblings. Make her feel important. Listen to her. Find what’s meaningful to her. All good advice! And Oliver actually puts it to use!

This novel was published by The Writer’s Coffee Shop on June 10th, 2014 and is available on Amazon here.